Coal takes millions of years to form once it's burned, it's gone for good.

Coal is a fossil fuel. It comes from the remains of plants that died about 100 to 400 million years ago. Coal is a non-renewable energy source because it takes millions of years to form. 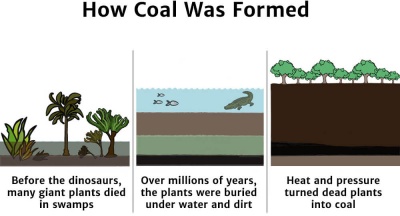 Coal was formed millions of years ago from dead plant matter, heat and pressure.

Coal is a rock created from buried plants that lived and died hundreds of millions of years ago, when the Earth's surface was covered by swampy forests.

How was coal formed?

Over 100 million years ago, dead plant matter would fall and accumulate at the bottom of swamps on the Earth's surface.

Over time, layers of water, rock and dirt built up above the layers of dead plants. The heat and pressure this created reduced the oxygen content of the plant matter, leaving rich hydrocarbon deposits.

As a result of these changes, what had once been plant matter gradually turned into coal.

If coal is all that way underground, how do we get it out?

Coal can be brought up from below the ground in two ways:

Surface mining is used when a coal seam is within around 200 feet of the Earth's surface. The soil and rock covering the coal (called the overburden) is removed, and specialist equipment is used to expose the coal seam.

After mining is complete, the overburden is put back, covered with topsoil and fertilizer, and seeds are planted. This helps to restore the biological balance and prevent erosion.

Why isn't coal a good choice of energy source?

Coal has the highest level of carbon of all the fossil fuels. This means it produces a higher amount of greenhouse gas emissions from energy use, which is bad news for our planet.

When burnt, coal produces significant amounts of pollution and gas emissions, including sulphate and nitrogen that can contaminate waterways and cause haze and smog.

Coal also produces mercury, which builds up in the fatty tissues of animals and fish – this can cause harm to humans who consume these species.

What Do You Mean? 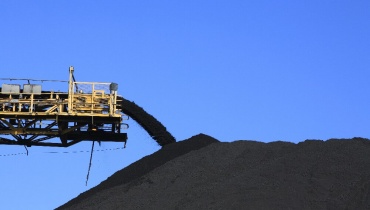 Coal is high in carbon and produces more greenhouse gases than other fossil fuels.

Coal is a rock formed from plant matter that lived and died hundreds of millions of years ago.

Surface mining is used when the coal seam is located around 200 miles below the Earth's surface.

Underground mining is used when coal is buried many hundreds of miles below the surface.

'Room-and-pillar' mining requires much of the coal to be left behind to support the mine's roof and walls.

'Longwall' mining allows a mined-out area to collapse in a controlled manner, using a special machine. This is more efficient than 'room-and-pillar' mining.

Mine shafts can sink as deep as 1000 feet below the Earth's surface. 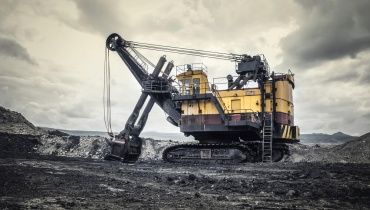 The top layers of soil are removed in surface mining to expose the coal.

Coal is formed from decayed plant matter that accumulated hundreds of millions of years ago. It is a non-renewable energy source and produces a significant amount of greenhouse gas emissions when burnt.